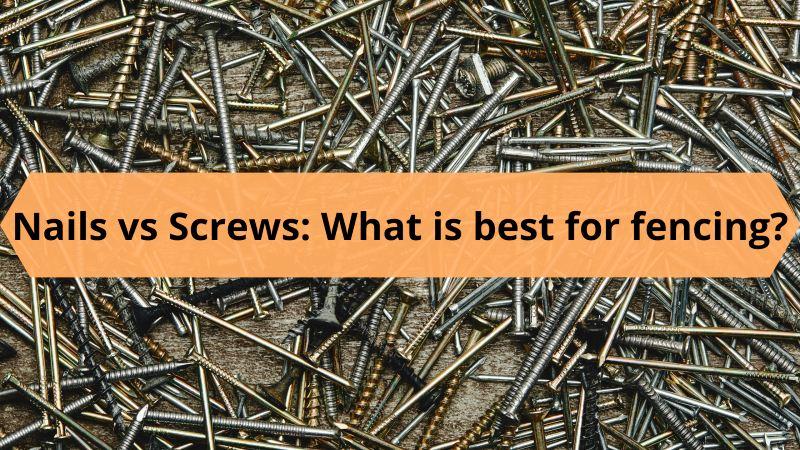 Nails vs Screws: What is best for fencing?

Nails and Screws are used widely as fasteners. Considering the material of the surface and cost, there are many differences between them. In this article, you will get to know about the basics of nails and screws, their pros and cons, and the best fasteners for wood fencing.

The Basics of Nails and Screws

Nails: Nails are a type of metal fastener which has a flat head, sharp tip, and smooth shank. However, Some nails can be headless. Usually, a hammer or any pounding force is used to drive the nails into the surface. Nails are cheaper than any other fasteners and can be installed quickly. The most common nails are made of steels.

Screws: Screws are another type of metal fasteners with a slotted head, sharp tip, and threaded sink. Usually, a screwdriver is used to twist the screws into the surface. The threaded body penetrates the surface of the material. However, a pre-drilled hole is required sometimes. Some screws are longer than the usual one. The thread can be shown only from the middle to the bottom part of the screws. It is generally more expensive than nails.

Pros and Cons of Nails and Screws

According to the basics of nails and screws, it has been noticed that they are different by their design and area of work. Let’s have a look at their pros and cons. Indeed, it will be easy to decide which one you should choose according to your task.

Pros and Cons of Nails

Let’s see the advantages of nails

Now let’s have a look at the disadvantages of nails.

Pros and Cons of Screws

Now it’s time to brush your eyes on some advantages of screws:

The disadvantages of screws are given below:

Which one is best for Fencing?

Both Nails and Screws are worked effectively on wooden fencing. But, still, there is a question like which one is the best. The answer depends on the material you are using and where you are using. Nails are easily driven fasteners, can hold surfaces for a limited period, and hard to remove. So if you are making a fence for your garden or dog house, it will be the right decision to use nails rather than screws. But, if you want fences for the outside of your house, you need to use screws as they can hold the surface strong and can be removed easily whenever you want to.

You will find many kinds of fasteners but always choose the fasteners according to the materials you are using. It will help you to get the desired result you want.